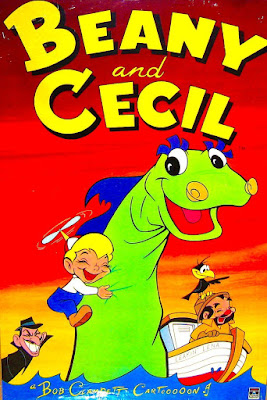 When I was growing up in the ’50s and ’60s every tee vee station — all 3 of ’em — played cartoons on Saturday mornings. The Not Now Silly Newsroom launches a new regular feature: Saturday Morning Cartoons.

True story: I got my love of punning from Beany and Cecil. I can remember the exact moment that switch was turned on: When they traveled to the No Bikini Atoll. Prior to that revelation, I missed many puns on the show. But, from that moment on I watched for them. Whenever I saw one, I’d think I was especially clever because I was probably the only one who got it.

Beany and Cecil was the first cartoon I can remember — other than Disney — where you knew the name of the cartoonist. It was in the opening theme, fer crise sake, and every kid at home sang along. You can, too:

Who was Bob Clampett? Born in 1913 near Hollywood, he demonstrated an early talent for entertaining. As the story goes on the official website:

At aged 12 years Bob Clampett saw the 1925 silent film “The Lost World.” As a boy full of imagination, sitting in the audience for that film was a life altering experience for Clampett.. Special effects supervisor Willis O’Brien brought alive the creatures with his stop motion wizardry. Wallace Beery cut a larger than life figure as Professor Challenger.

At the end of the film a brontosaurus jumps off of the London Bridge into the Thames River and as he swims away only his neck is visible from out of the water. Clampett immediately saw an interesting character in the action from that final scene.

Clampett came home and set about with his mother’s help to sew a sock puppet of this character. He then performed puppet shows in front of the neighborhood kids delighting them with the antics of his sea serpent character who bested the professor in the pith helmet.

For years after that Clampett frequently entertained with this sock puppet serpent character and in fact kept it nearby in a handy place.

Eventually, in an early example of merchandising and marketing, toy departments all across the country were selling green Cecil the Sea serpent hand puppets.But I’m getting ahead of myself.

However, speaking of merchandising: While still a teenager he came close to being sued by the Disney company when he tried to mass produce a Mickey Mouse doll. Luckily he got to show it to Walt himself, who not only liked it, but helped Bob and his father set up on the studio lot to mass produce the doll.

Having always demonstrated a facility for drawing, Clampett dropped out of high school to go to work as an “inbetweener” for Harmon-Ising, which eventually became Warner Bros. Cartoons. However, he never lost his interest in puppetry. As his website tells it:

At this show he saw a demonstration of television for the very first time. He ran to his car and pulled his sea serpent hand puppet out of the glove compartment. Clampett was able to test for the first time what a puppet might look like on live television and recognized the power of this brand new medium.

In 1937 while at Warner cartoon studio, Clampett built a puppet studio directly across the street. He worked there primarily on nights and weekends with his friend Al Kendig to develop 3D stop motion puppetry.

In the early 1940’s Clampett pitched his idea for filmed puppet shorts about a sea serpent and sea captain to Warner Cartoon studio head Leon Schlesinger. However, Schlesinger turned the project down by saying, “A shoemaker sticks to his last.” This was what Clampett later referred to as a critical moment in his career because Clampett was then able to retain the rights to his most important original 3D creation.

You can read more about how Bob Clampett continued to develop his television puppet show and how that eventually led him back to his original vocation of animation HERE. However, I’m as bored as a 5-year old waiting for the cartoons to start. Pass the popcorn.