When I first moved back to ‘Merka in 2005 I used the nom de troll of Aunty Em Ericann.

It was under that name that I first started writing Fox “News” criticism for NewsHounds. And, it was also under this name that I discovered Charles Avenue, which has let to dozens of stories about this community that still suffers from systemic racism.

This is one of the first stories about Coconut Grove I wrote:

The Shame of Coconut Grove 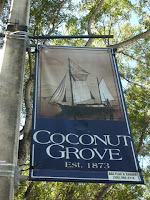 Number Two in a series

I said a picture is worth a thousand words, but either I should have included more pictures, or at least a couple of words, because most people misunderstood what the picture represented.

It was viewed as a current picture of…as what exactly? A political statement? An uncaring neighbour? A lack of respect for those founding Blacks who, having settled the area, helped the Whites survive and conquer the conditions found in this humid, mosquito-infested swampland that was southern Florida in the late 1800s?

Well, yes it’s all that, but it’s more and my picture didn’t tell the full story. 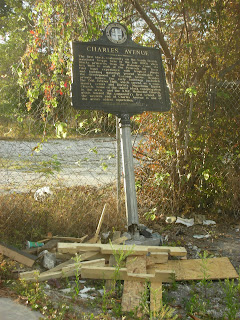 I have since visited Charles Avenue on four subsequent occasions. Only once was there no trash piled at the bottom of the historical marker. But, as you can see, it wouldn’t have mattered. The base is broken and the sign leans at an uncomfortable angle against a wire fence surrounding an empty lot of gravel and weeds.

I have also now done a moderate amount of research on the area. The story of Coconut Grove, writ large, is the story of what happened in every Black neighbourhood in America, save NYC which has always been unique. 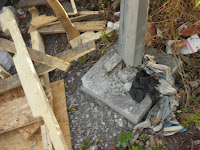 This historical marker demonstrates years of neglect of Black heritage, while the heritage (and racial make-up) of the area grew to be overwhelmingly one associated with White folk.

There is one thing that differentiates Black Coconut Grove from all other Black communities. When one speaks of “the other side of the tracks” it is a literal description of these areas. Black Coconut Grove has no railroad tracks to separate it from the more affluent homes. Main Highway is the main dividing line in The Grove. 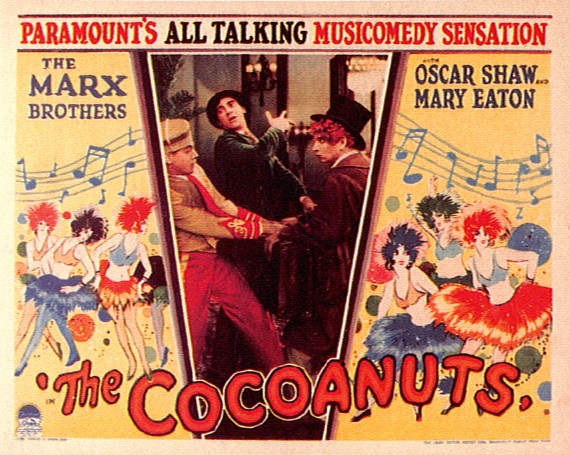 Coconut Grove, on the west side of Biscayne Bay, was a sleepy holiday destination in the early 1900s, unknown by most United Statesers and frequented by The Very Rich™. However, in December of 1925 “The Cocoanuts,” starring The Four Marx Brothers, opened at the Lyric Theatre in NYC. The madcap antics take place in Cocoanut Grove [sic; the original spelling], Florida, where Groucho runs a bankrupt hotel. The George S. Kaufman play ran for nearly 300 performances and became the first Marx Brothers’ movie in 1929. In the movie Groucho famously said, “You can have any kind of a home you want. You can even get stucco. Oh, how you can get stucco.”

And so, for the longest time, The Grove was associated with carpetbagging land speculators selling swampland to rich northerners.

Yet, something was happening in The Grove. First annexed to Miami in 1925, the same year the Marx Brothers trod the boards in the play, the sleepy town of The Grove already bragged of a library, school, yacht club and chapel, joining the Peacock Inn as structures in town.

Later, after WWII, Coconut Grove became an artists’ destination after servicemen, who had experienced Florida weather for the first time, packed up their families and moved south. The great influx of people occurred in the 50 years since. These days Coconut Grove is one of the richest and most desirable neighbourhoods in these United States.

As more people moved into The Grove the division that Main Highway represented became the colour line.

Demographically, Coconut Grove is split up into North-East Grove and South-West Grove, and as of 2000, the total population of both of the neighborhood’s sections made up 18,953. 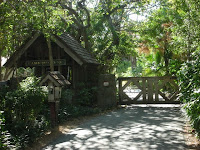 Which side of that line do you think this historical marker is on? If you cross Main Highway due east from Charles Avenue and the historical sign you will find the gates of “Camp Biscayne,” a lush gated complex less than a football field away. Most of the communities on the east side of this line are gated, as near as I can tell. This is a far cry from those that run along Charles Avenue, small bungalows and shotgun shacks that are set up cheek to jowel.

More to come…
With all my love, Aunty Em