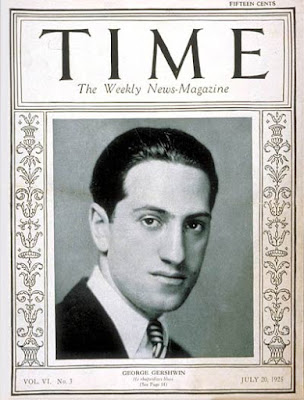 Born on this date in 1898, by the time George Gershwin died at the all-too-early age of 38, he was known across the globe as one of the greatest composers who ever lived.

Born in Brooklyn to Russian-Jewish immigrant parents, originally the family name was Gershowitz, which George’s father Americanized to Gershwine. George was actually born Jacob Gershwine, but was called George. He later dropped the “e” from the end of his name, and eventually so did the rest of the family. 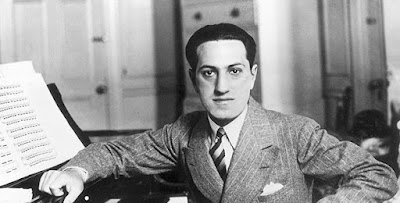 As well, George Gershwin wrote many songs without lyrics. F’rinstance, most everyone recognizes passages from Rhapsody In Blue, whether they know the composer or not. The score was commissioned by The King of Jazz, Paul Whiteman, to debut at what he was billing as An Experiment In Modern Music on February 12, 1924. It was an instant classic when it was first performed.

We are used to hearing Rhapsody In Blue with a big orchestration. A revelation of the digital age is this recording of a piano roll that George Gershwin cut during his piano playing prime. Not only do we get to listen to the Master at work, but after he ‘cut’ the piano roll they rolled it right back to the beginning and Gershwin ‘cut’ a second piano part; in effect making this one of the earliest candidates for overdubbing. Close your eyes and listen to Gershwin’s 4 hands.

Of course one could go on endlessly about George Gershwin — as dozens of books and documentaries have — but as I always say: It’s what’s in the music that counts: