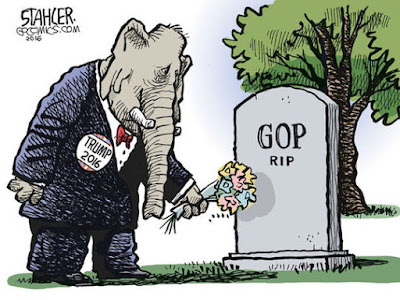 The worst thing to have happened this election cycle is not the ascendancy of Demagogue Donald Trump, but the premature death of the G.O.P. We should all be concerned.

Let’s be clear: The destruction of the Grand Old Party of Lincoln didn’t start with Trump. As a cancer on the nation’s body politic, The Child Named The Donald delivered the coup de grâce. However, the Republican Party has been sick for a long time; weakened enough that Trump could put it on life-support.

The Not Now Silly Newsroom has identified Patient Zero. The original infection, the moment this debilitating disease began, was the day John McCain brought Sarah Palin out of the deep freeze of the Alaskan tundra to be his vice presidential pick. For the same reasons that hospitals like to keep it really cold, the chill up there kept her from infecting too many. Once she arrived in the hot house of national politics, she was able to use incomprehensible word salads to infect multitudes of people already weak with fright that the ‘Merka they knew was changing.

The McCain-Palin ticket lost spectacularly, but by then Palin had won, invading the host in a way no one noticed at the time.

Like any new disease just being discovered, it needed a name. It finally got one the following year — February 19, 2009, to be exact. Microbiologist Rick Santelli, who was slumming as a commentator on CNBC from the floor of the Chicago Mercantile Exchange, looked into his electron microscope and then gave his best diagnosis of the problem that ailed the country. Watch:

Remember what caused that rant?

Newly-inaugurated President Obama had the audacity to suggest the country should bail out Main Street (homeowners in foreclosure), as opposed to Wall Street and Wall Street went bonkers. Oddly enough, so did a lot of other people who thought that they were getting a raw deal because they struggled with their mortgages and no one ever bailed them out for making all the right decisions. Better to give the money to the Too Big To Fail banks. Right?

So the disease coursing through the nations veins was named the Tea Party, which already had a ‘Merkin Mascot: A mouth-shootin’, gun-totin’, Obama-hatin’, G droppin’ know-nothing to rally ’round. After Pain quit her day job as the duly elected governor of Alaska, the Tea Party had their whack job.

TO BE FAIR: To McCain’s credit, he did try and shut down the more extreme voices at his rallies, but he’s the last republican to do so. The die was cast, to mix metaphors. 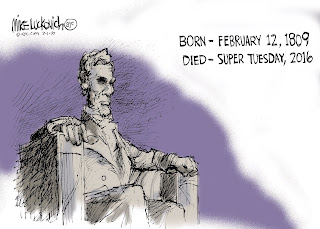 Soon Tea Party Loyalists — wearing tri-cornered hats with tea bags hanging from them, fer fuck’s sake — started interrupting Democratic Town Halls. Republicans either condoned it, or never said a word against it. Then whacked-out Tea Party candidates started running fpr office and the Republicans either played nice with them, or just tried to ignore them, until some of those crazy MoFos got elected.

The Tea Party ran on platforms that were simply unrealistic. They were based upon Manichean ideals, which could never survive a democracy like the 3 branches of government the Founding Fathers had the foresight to create, anticipating this exact scenario. Another way the Founding Fathers made it hard for ideologues to gain control was requiting reelection every 2 years for Congress and 6 years for the Senate.

So, every 2 years for the entire President Obama administration Tea Party candidates made more and more outlandish promises. And, these crazy MoFos kept getting elected, or reelected, to the point that were challenging the natural order of the party under whose banner they had run. [See: Boehner, John]

And then came Donald Trump. He fed into this entire disaffected group of people, whether they had considered themselves Tea Party Stalwarts, or just pert of the working poor. He spoke to their fears. He fanned the flames. He ran for President. He won the Republican nomination.

Almost none spoke against the racism, xenophobia, misogyny, and bullying of Trump. Many of them ended up supporting him, even among those he bullied. Donald Trump will now, and forever, be the face of the Republican Party.

And, that’s the biggest reason that the GOP must die. It would take — at the very least — a generation to wash off the Trump stink. Better to euthanize the party and be done with it. Start anew. 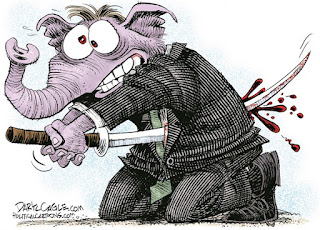 However, and this is the most important part of my Aunty Em Editorial (or rant, take your pick): It is Seriously Bad Mojo that the Republican Party is, effectively, dead. Death by suicide, but dead all the same.

While the Founding Fathers were against political parties, it didn’t take long for partisan politics to form. I’ll let the Wiki fill in the blanks:

The United States Constitution has never formally addressed the issue of political parties. The Founding Fathers did not originally intend for American politics to be partisan. In Federalist Papers No. 9 and No. 10, Alexander Hamilton and James Madison, respectively, wrote specifically about the dangers of domestic political factions. In addition, the first President of the United States, George Washington, was not a member of any political party at the time of his election or throughout his tenure as president. Furthermore, he hoped that political parties would not be formed, fearing conflict and stagnation, as outlined in his Farewell Address.[6] Nevertheless, the beginnings of the American two-party system emerged from his immediate circle of advisers. Hamilton and Madison, who wrote the aforementioned Federalist Papers against political factions, ended up being the core leaders in this emerging party system. It was the split camps of Federalists, given rise with Hamilton as a leader, and Democratic-Republicans, with Madison and Thomas Jefferson helming this political faction, that created the environment in which partisanship, once distasteful, came to being.[7][8]

And, that’s how it’s been ever since. The 2 party system eventually stabilized into Democrats and Republicans, battling it out of the direction of the nation. The two part system (with occasional, feeble challenges by 3rd or 4th party candidates) is far healthier for ‘Merka than a one party system. [See: Russia, Cuba] That’s what could happen after the GOP does its post-election postmortem. 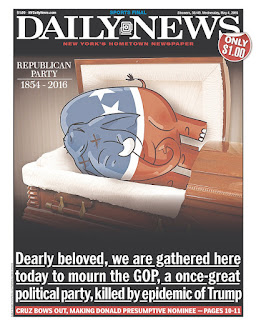 The best results of the 2016 election could be the formation of several parties from the various factions running this election cycle. Of course there’s the Libertarian and Green Parties, which never really seem to get enough support during the primaries to even make it to the debates. However, this year you also have the Bernie Democrats, who could be looking for a new home after this election. The Anybody But Hillary Democrats might come home. Or, they could start something new as things shake out over the next 4 years of a Clinton presidency.

On the other side of the aisle: The Anybody But Trump faction could stick with the bones o the GOP, which needs rebranding to have any viability. Then there are Conservatives, who are voting Trump because it’s all they’ve got, but may want to establish their own party that sticks to Conservative principles.

Then you have the Trump supporters, which are not small in numbers. Once the finger-pointing begins, they’ll be at each other’s throats. There will be a great splintering into several different groups, just as Fox “News” is facing the same divisions in its audience. 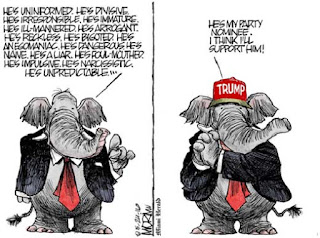 I predict that things will eventually settle into the Rage Party, or the Breitbart/alt-right racialists who now feel a freedom to voice their Inner Ugly in ways they have not since the ’50s.

Another faction will be the disaffected poor, who liked some of Trump’s message, if not the ugly rhetoric. Then comes the evangelicals who will eventually realize that they backed a conman, especially as court judgements against him start to pile up.

Then, finally, there is The Tea Party, which has been marginalized this election as one Tea Party darling after another was vanquished by Cheetos Jesus. If they play their cards right, they may be able to pick up some of these groups, but I don’t think they’ll ever have the same influence as they once had. [See: Cruz, Ted]

A political system with several political parties is how it often works — or doesn’t — in countries that have parliaments. If no party has a clear majority in the House, they are forced to find was to form a coalition to get anything passed. This requires hard bargaining and compromise, the exact thing that’s been missing during the Obama Administration.

Bring on more political parties, but please don’t celebrate the demise of the Grand Old Party. It’s been a sad thing to witness.