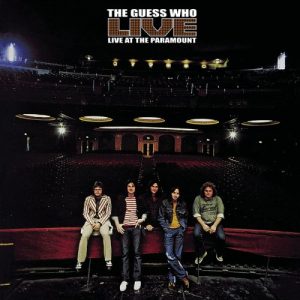 On this day 45 years ago The Guess Who set up their equipment on the stage in Seattle, Washington, and performed the music that would eventually be released as “Live at the Paramount.

At this point the band consisted of Burton Cummings, Kurt Winter, Don McDougall, Jim Kale, and Garry Peterson. Randy Bachman left the group almost 2 years to the day earlier, following a show at the Fillmore East on May 16.

According to Ultimate Classic Rock:

The band’s classic lineup wouldn’t reunite for more than a decade and Bachman and Cummings would never write another song together.

Even without their founding guitarist and main songwriter, the Guess Who continued to have success in the early ’70s. The band brought on guitarists Greg Leskiw and Kurt Winter, who took the role of Cummings’ new writing partner. The Guess Who still landed hits on the charts (including “Share the Land,” “Bus Rider” and “Clap for the Wolfman”), albeit to diminishing returns. As hitmakers, the Guess Who were eventually eclipsed by their former bandmate.

In 1971, Bachman formed Brave Belt, which morphed into Bachman-Turner Overdrive.

And in 1974, with “You Ain’t Seen Nothing Yet,” another one of Bachman’s bands topped the charts.

Live at the Paramount would be Jim Kale’s last with the band.

Please read Me and Jim Kale, about an ill-fated trip to Sudbury Arena.

The original LP consisted of 7 tracks and clocked in at 48:32. For the 2000 CD re-release the music was remixed and padded out with another 6 tunes from the same night, bringing it in at just over an hour 15. ENJOY!!!

Crank it up and CanCon Corner!!!