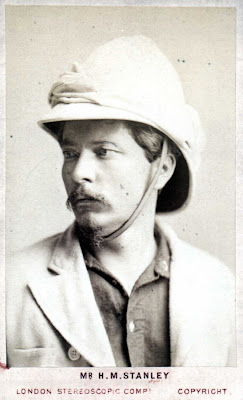 “Dr. Livingstone, I presume?” was first spoken on this day in 1871 and repeated millions of times in the last 145 years.

Henry Morgan Stanley, born John Rowlands, spoke those words to David Livingstone, who was thought to be lost in Africa while searching for the source of the Nile River during the great White Colonization of that great continent.

Stanley’s early life is almost unbelievable. He was a bastard whose mother turned him over to his grandfather. When the old man died while the boy was 6, he was sent to a workhouse where, despite the reputation of workhouses, managed to get a good education.

He reinvented himself at the age of 17. First he took a job as a cabin boy on an American freighter. When he landed in New Orleans he took the name of a local cotton merchant, even claiming to have been adopted.

Stanley also fought on both sides in the Civil War. First he joined the Confederacy, fighting at the Battle of Shiloh. After his capture, he switched sides and joined the Union. However, he apparently deserted the Union Army to join the Federal Navy, before he eventually jumped ship. Freelancing as a journalist, he toured the American West covering the conquest of the Native Americans.

In 1869 the New York Herald sent him on assignment to find Scottish missionary and explorer David Livingstone, who was thought to be lost or dead in Africa.

Livingstone hoped his African trips would make him world-renown, which they did. That popularity allowed him to speak out against the East African Arab-Swahili slave trade. “The Nile sources,” he told a friend, “are valuable only as a means of opening my mouth with power among men. It is this power which I hope to remedy an immense evil.”

Ironically his, and Stanley’s, trips began what became called the “Scramble for Africa,” in which the colonial powers took over the continent. 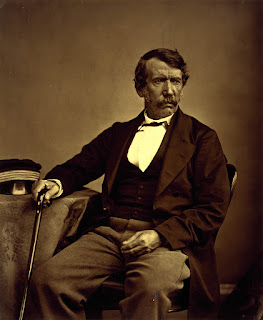 According to the BBC’s Historic Figures:

Livingstone became convinced of his mission to reach new peoples in the interior of Africa and introduce them to Christianity, as well as freeing them from slavery. It was this which inspired his explorations. In 1849 and 1851, he travelled across the Kalahari, on the second trip sighting the upper Zambezi River. In 1852, he began a four year expedition to find a route from the upper Zambezi to the coast. This filled huge gaps in western knowledge of central and southern Africa. In 1855, Livingstone discovered a spectacular waterfall which he named ‘Victoria Falls’. He reached the mouth of the Zambezi on the Indian Ocean in May 1856, becoming the first European to cross the width of southern Africa.

Returning to Britain, where he was now a national hero, Livingstone did many speaking tours and published his best-selling ‘Missionary Travels and Researches in South Africa’ (1857). He left for Africa again in 1858, and for the next five years carried out official explorations of eastern and central Africa for the British government. His wife died of malaria in 1862, a bitter blow and in 1864 he was ordered home by a government unimpressed with the results of his travels.

At home, Livingstone publicised the horrors of the slave trade, securing private support for another expedition to central Africa, searching for the Nile’s source and reporting further on slavery. 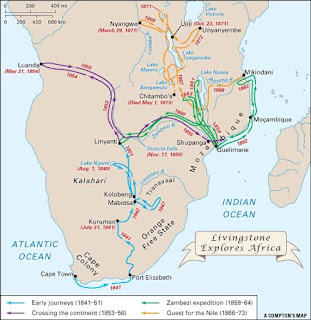 And, this is where Stanley comes in. On this final trip Livingstone had not been heard  from in a while and the New York Herald hired the freelance writer to find him and report back. But first Stanley stopped off in Egypt to cover the opening of the Suez Canal.

The Wiki picks up the story:

Stanley travelled [sic] to Zanzibar in March 1871, later claiming that he outfitted an expedition with 192 porters.[17]:68 In his first dispatch to the New York Herald, however, he stated that his expedition numbered only 111. This was in line with figures in his diaries.[18]:13 Bennett, publisher of the New York Herald and funder of the expedition, had delayed sending to Stanley the money he had promised, so Stanley borrowed money from the United States Consul.[5]:93–94

During the 700-mile (1,100 km) expedition through the tropical forest, his thoroughbred stallion died within a few days after a bite from a tsetse fly, many of his porters deserted, and the rest were decimated by tropical diseases.

Stanley found Livingstone on 10 November 1871 in Ujiji, near Lake Tanganyika in present-day Tanzania. He may have greeted him with the now-famous line, “Doctor Livingstone, I presume?” It may also have been a fabrication, as Stanley tore out of his diary the pages relating to the encounter. Neither man mentioned it in any of the letters they wrote at this time.[5] Livingstone’s account of the encounter does not mention these words. The phrase is first quoted in a summary of Stanley’s letters published by The New York Times on 2 July 1872.[19] Stanley biographer Tim Jeal argued that the explorer invented it afterwards to help raise his standing because of “insecurity about his background”.[5]:117

Preserving a calmness of exterior before the Arabs which was hard to simulate as he reached the group, Mr. Stanley said: – “Doctor Livingstone, I presume?” A smile lit up the features of the pale white man as he answered: “Yes, and I feel thankful that I am here to welcome you.”[21]

Livingstone died 2 years later from the malaria and dysentery. Stanley and Livingstone became known around the world due to Stanley’s dispatches and book. The ironically their gripping adventures only hastened the colonization of Africa.

Learn more from a documentary narrated by James Mason and the fictional 1939 Stanley and Livingstone, starring Spencer Tracy and Cedricc Hardwicke.