As Hurricane Matthew barrels towards Florida, let’s take a look back to Hurricane Wilma, my first and last hurricane.

Hurricane Wilma smashed into the west coast of Florida — at Cape Romano, south of Naples — on October 24, 2005.

However, Wilma had already been a devastating storm for 8 days prior. Wilma was unlike most hurricanes, which start off the west coast of Africa as a area of low barometric pressure. They move across the ocean, picking up speed and power until they hit somewhere in the Caribbean, Mexico, or Florida. However, Wilma not only scored the hat trick, hitting all three, but unconventionally started in the Caribbean as a low pressure trough southeast of Jamaica on October 13th. Barely moving, it went from a Tropical Depression, to Tropical Storm, to Hurricane in under 5 days, eventually becoming a Category 5, the largest on the Saffir-Simpson Scale.

Eventually pushed by other weather patterns to the north, Hurricane Wilma first drifted over to Mexico and the Yucatan peninsula. These weather patterns also slowed Wilma’s forward momentum, so once it hit Cozumel, it just sat there and churned for almost 2 full days. Usually a hurricane loses strength when over land, but Wilma was nearly as strong when it left Mexico as when it arrived.

After that, Wilma moved into the Gulf of Mexico where it was affected by another weather pattern, which not only turned the hurricane to the northwest, but luckily, it also increased its forward momentum. By the time it hit Florida, it was racing. It crossed the state on a diagonal in less than 5 hours, lessening the potential damage than if it had continued to move slowly.

As it was the damage in Florida was significant. As the WikiWackyWoo says about Broward County, where I live:

Wilma was the most damaging storm in Broward County since Hurricane King in 1950. Winds between 80 and 100 mph (130 and 160 km/h) lashed the county for about five hours. Widespread minor to major wind damages to residential and commercial buildings occurred. At least 5,111 dwellings were left uninhabitable, including 2,800 condominiums and apartments, 1,441 mobile homes, 42 single-family dwellings, and 170 commercial buildings. Much of the damage was incurred to roofing and siding, while interior damage was caused by rain and winds. Along the Intracoastal Waterway, a number of boats, docks, bulkheads, and dry storage marinas sustained impact, and many houses and businesses suffered roof damage.[41] The storm severely damaged 69 school, totaling as much as $100 million.[42] 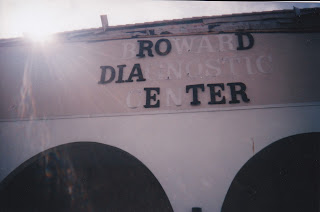 I rode out Hurricane Wilma in the condo with Pops, who would turn 80 4 months later. I was scared because I had never experienced a hurricane before, but Pops was already a veteran of Florida hurricanes.

In fact, during Hurricane Andrew in 1992, when I was still writing news for BreakfastTelevision at Citytv, we did a live phoner with Pops because Andrew was lashing Florida while we were on the air. Pops was in no danger from Hurricane Andrew, which ravaged Homestead, some 60 miles to the south, before it went into the Everglades, the Gulf of Mexico, and, eventually, Louisiana.

That wasn’t as foolhardy a decision as it sounds. There are 2 bathrooms and a large walk-in closet in the condo that are relatively secure. They are what I call “interior rooms” or rooms within rooms. However, every decision we made after that was extremely foolhardy and dangerous.

That’s because Pops and I did not shelter in those places. We wandered around the condo watching all the debris fly by the windows. We were lucky nothing flew through the windows as we were watching. I am reminded of this comedy routine by Ron White.

Then it all stopped and everything became quiet. We were in the eye of Hurricane Wilma.I went outside and took a short walk. It was beautiful. The sun shone down and it looked like a typical day in Paradise. The eye wall was so far away that I couldn’t see it at all.

Then the wind started to pick up from the opposite direction and I headed back inside to stare at it through the windows again. SMH!!!

The aftermath for us is that we were without power for 18 days during what became a heat spell. It was like going camping, but with more comfortable furniture.

That was then. This is now:

Within the next 12 hours Hurricane Matthew will arrive. This time it’s taking the more traditional east to west direction.

However, then it chooses an alternate route.

There are weather patterns to the east of Florida. The latest models say they could push Hurricane Matthew to the south and then back to the west. Florida could get whacked by Matthew twice within the space of 5 days.

Hurricane prediction is still pretty shaky 5 days out, so I am not panicking yet. However, to be honest, I am more concerned about the 2nd hit. If it’s anything like the last time we won’t have any power after the first hit. Consequently, it will be that much harder to get the weather alerts on tee vee and computer. I’ll have to make sure I can keep a charge on my phone. However, if you don’t hear from me, you know I’ve been washed out to sea.

Meanwhile, here are some of the other pics I took of Hurricane Wilma damage. 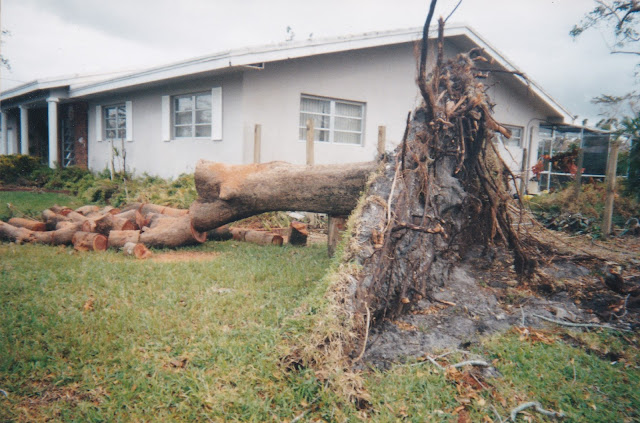 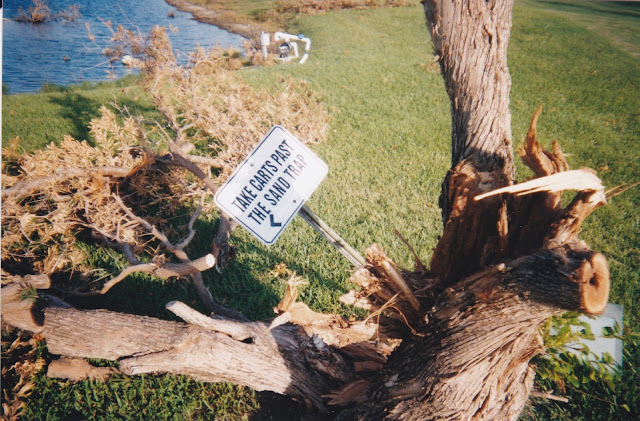 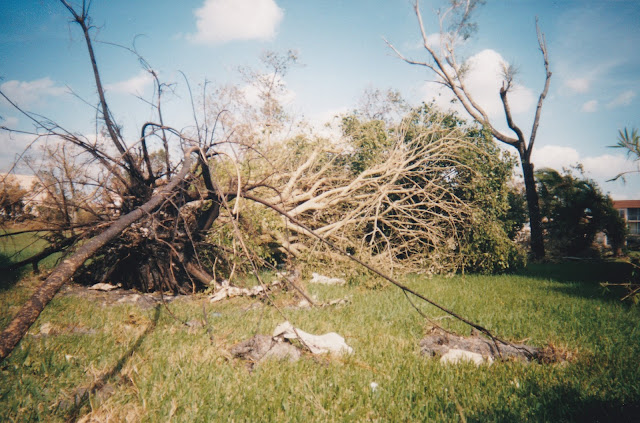 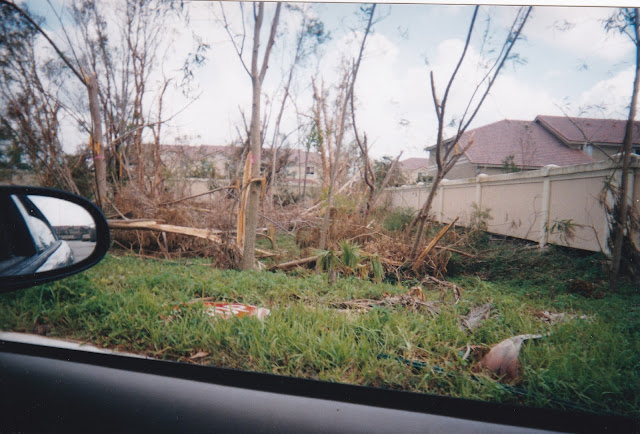 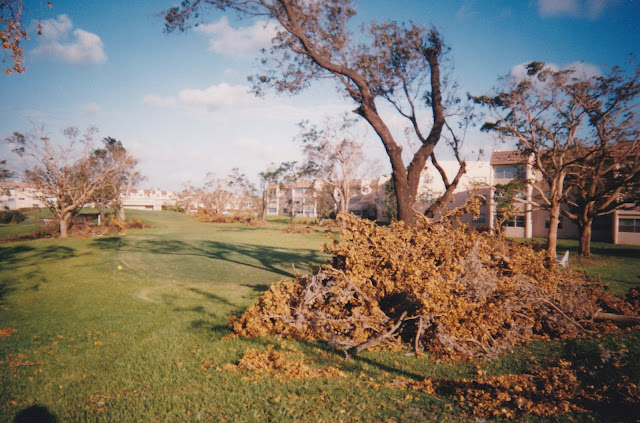 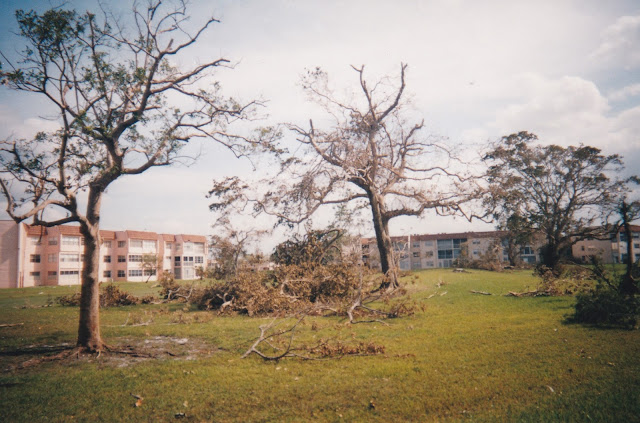 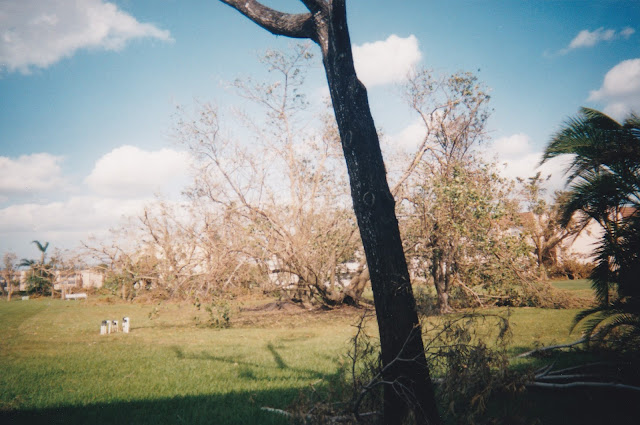 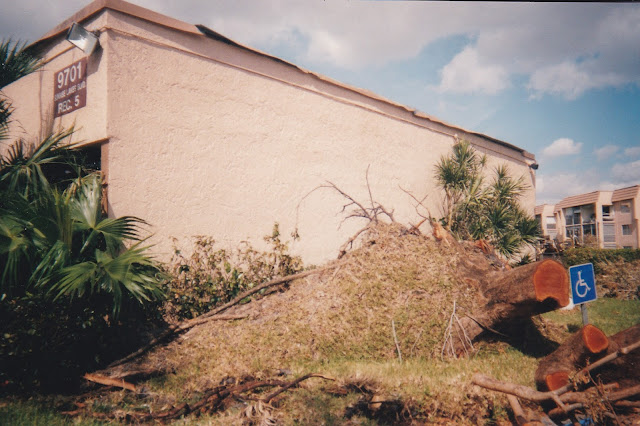 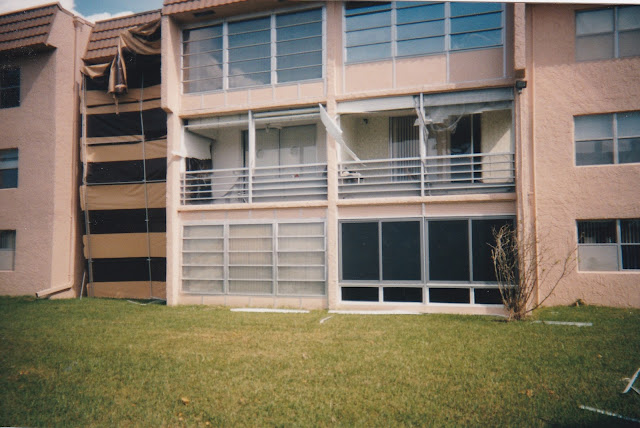 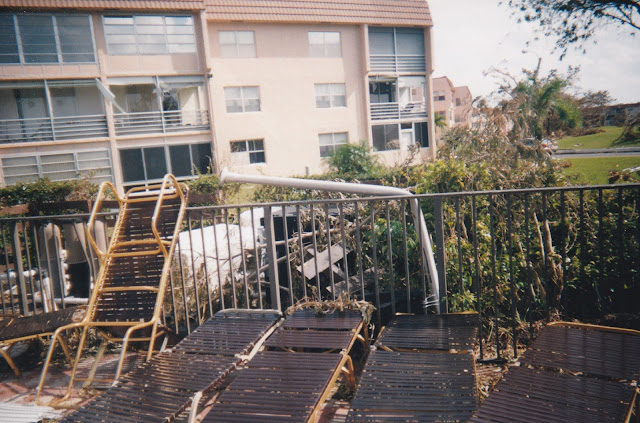 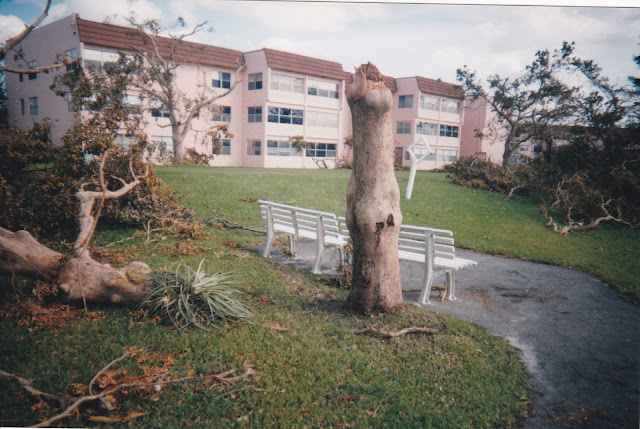 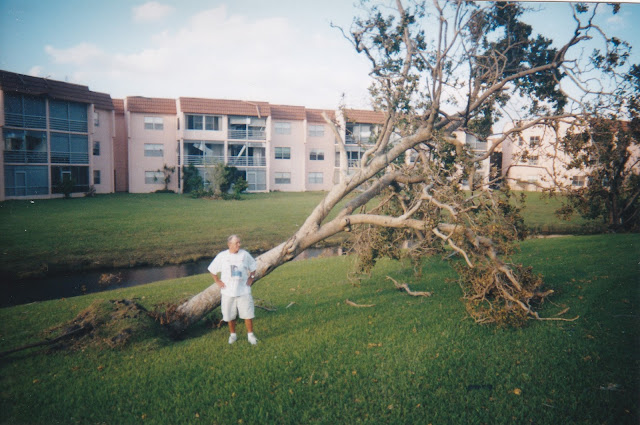