Two gatherings in Coconut Grove on Saturday morning were as different as Black and White.

On Grand Avenue Thaddeus Scott and William Wallace were waking up in tents. This to protest a lack of affordable housing and the deplorable living conditions in West Grove. Less than 3 miles away, Grove 2030 was sponsoring a charrette on the practicality of Coconut Grove seceding from the City of Miami.

There was no breakfast waiting for Scott and Wallace in their empty lot on Grand Avenue, but Grove 2030 put out a great spread in the back of Vizcaya Garage: buckets of coffee, choice of juice, donuts, muffins, bagels and the obligatory cream cheese.

The evening prior this reporter arrived to sit on his customary bench on Grand Avenue and watch Housing for All Miami set up their meager Tent City, a show of Civil Disobedience that, theoretically, could lead to arrests. I had been hearing rumblings of this protest for a couple of weeks, but always on the downlow. I was never able to get someone on the record about it. I had less than a day’s notice when I was finally told the protest was a go. From HfA’s Facebook page: 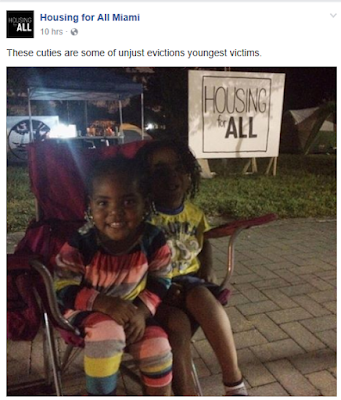 Why Housing for All?

Some very basic facts about #coconutgrove:
There is a housing crisis. Developers buy up single family homes and apartments – some in disrepair, some not – level them, and sit on the land.

Landlords also sell their apartment buildings by the block. They refuse to sign leases with their tenants so when the buildings sell, they evict with 15 days notice. Another common practice is to let the buildings run down to unsafe and uninhabitable, at which point the city steps in and condemns them, forcing the tenants to move out with little-to-no warning. Fifteen days to find housing in one of the nations toughest housing markets.

We are talking about HUNDREDS of people. Kids, parents, grandparents whose families have lived in this neighborhood for generations. They built these houses. Many of them built this city.

I turned my attention to the slow motion humanitarian crisis on Grand Avenue a little more than a month ago — soon after I gave up on the E.W.F. Stirrup House. As one of my last acts for that story I was able to score an interview with developer Peter Gardner, of Pointe Group, now called Sabal Hill. He had recently signed on — or invested in — the Stirrup House Bed & Breakfast.

By then I had already started researching Grand Avenue. During our interview on the Stirrup House, I pulled a Bait & Switch on Gardner. I whipped out a hand-drawn map of Grand Avenue on which I had the current owner of every property mapped out and colour-coded. The names of Gardner’s companies were featured predominately on many of those properties. I started quizzing him on the plans for Grand Avenue, which have been stuck in limbo for well more than a decade.

SYNCHRONICITY ALERT: Two years ago — almost to the day — I was invited to the first Grove 2030 charrette. I went as a journalist, but I was cajoled into participating and forced to join one of the brainstorming teams. At one point (no pun intended) someone on our team brought up the upcoming development promised for Grand Avenue by Pointe Group. Having done some perfunctory research on Grand even back then, I blurted out, “That will never happen.”

Little did I know that I was talking to Margaret Nee of Pointe Group. We had a mini-argument in which she invited me to come see the architectural model any time, because it was definitely going to happen. I never went to look at the model because I wasn’t covering Grand Avenue. However, in the interest of FULL DISCLOSURE I told Peter Gardner this story at the beginning of our interview. Who knows whether Margaret had and she was the person who had facilitated this meeting.

In the last few weeks I have left more than a dozen phone messages with Margaret Nee to get Peter Gardner to confirm or deny a rumour I had been hearing about the E.W.F. Stirrup House. 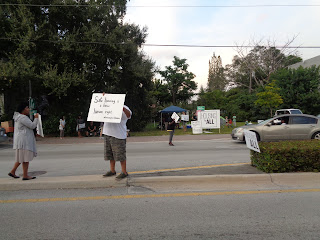 However, this came at the same exact time that many of the properties along Grand Avenue were about to be flipped again, this time to Terra Group. As well, Commissioner Ken Russell had convinced the city to launch a million dollar lawsuit against several of the slumlords along Grand Avenue because of the deplorable conditions in their buildings. This lawsuit has delayed the sale of the properties until all the parties involved figure out who’s going to pay to settle this lawsuit, or whether it will be defended by lawyers for the developers, who are already suing each other.

TO BE FAIR: If I were Peter Gardner, I wouldn’t take my calls either. Not only did I change topics on him, but pretty much warned him that I was now watching Grand Avenue [and 2 lots he had acquired on Charles Avenue]. However, Margaret Nee has not even had the good manners to call me back and say, “We will have no comment.” That would be better than dodging my phone calls, but I expect no less from rapacious developers who say they want to build something wonderful for the neighbourhood, but have no empathy whatsoever for the people currently living in the slum they own.

Yesterday morning I listened to the Grove 2030 people complain about how their lily White neighbourhoods are changing in ways they cannot control. However, my mind was really on Wallace and Scott sleeping in tents on an empty lot on Grand Avenue to bring attention to gentrification in the heart of the historically Black neighbourhood in ways they cannot control. I grew so bored with the Grove 2030 meeting, I sketched out an opening paragraph (now discarded) lovingly describing all the various food and drink options at Grove 2030, wondering what Scott and Wallace had for breakfast. 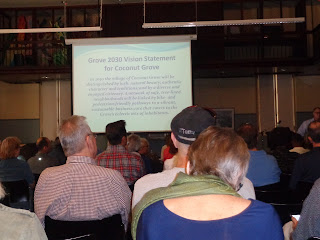 IRONY ALERT: There was so much food at Grove 2030 that it was all packed up and sent to the Housing for All protest when the charrette was over. While there was something beautiful and magnanimous about the gesture, it also gave off the faint odour of more White colonialism and paternalism. To use an analogy from Canada: Bread and cheese day.

It would have been much better if the Grove 2030 people had shown up, picked up a sign, and joined the protest.

How long will the Housing for All protest continue? William Wallace says they are prepared to camp out indefinitely, or until the slumlord owner shows up and orders the police to clear the lot. Miami police would have no choice but to comply. In that eventuality, there are several contingency plans, which I won’t reveal.

However, what’s really needed is more people, more tents, more noise, and more publicity. As far as I know I have been the only media to show up and cover this story.

Where is the Miami Herald? Asleep again, me thinks. However, it did have the time to write about the Woman arrested in luxury condo protest: City and cops violated my rights. The only time the Miami Herald comes to West Grove is to cover crime.

Where are the local tee vee stations? They’ll put news choppers in the air over Douglas Road and Grand Avenue when police put the local schools and neighbourhood on lockdown. Why haven’t they covered this protest?