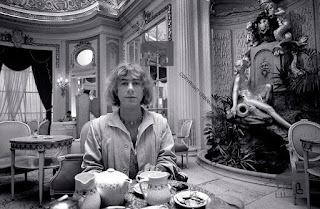 I’m going to use today’s Super Moon to introduce you to one of my favourite artists: Kevin Ayers.

Ayers got his start at fame with Psychedelic Jazz Rock outfit Soft Machine, which also produced Robert Wyatt (another fave) Daevid Allen, and Mike Ratledge, among others. However, Ayers was the first one out of this band with the troubled history.

I played the grooves off that record when it was new.
I’ll let the WikiWackyWoo give you an overview:

Kevin Ayers (16 August 1944 – 18 February 2013) was an English singer-songwriter and a major influential force in the English psychedelic movement. Ayers was a founding member of the pioneering psychedelic band Soft Machine in the mid-1960s, and was closely associated with the Canterbury scene.[2] He recorded a series of albums as a solo artist and over the years worked with Brian Eno, Syd Barrett, Bridget St John, John Cale, Elton John, Robert Wyatt, Andy Summers, Mike Oldfield, Nico and Ollie Halsall, among others. After living for many years in Deià, Majorca, he returned to the United Kingdom in the mid-1990s before moving to the south of France. His last album was The Unfairground, recorded in New York City, Tucson, and London in 2006.[3] The British rock journalist Nick Kent wrote: “Kevin Ayers and Syd Barrett were the two most important people in British pop music. Everything that came after came from them.”[4]

Kevin Ayers was also part of one of the greatest Super Groups ever assembled:

But, what does have to do with the Super Moon? One of my favourite Ayers tunes and fave LP have the word “moon” in the title. Enjoy and, hopefully, this is enough to make you seek out some more Kevin Ayers music.

FULL DISCLOSURE: At one time I worked for Island Records Canada and promoted the music of Kevin Ayers, but I already arrived as a fan, having bought the Soft Machine’s LPs when they were newly released.