Celebrating his 81st birthday today is the Grandfather of Reggae and the father of Dub Reggae, Rainford Hugh Perry, aka Lee “Scratch” Perry.

Back in the days before the word Reggae even existed — when it was still called Ska, or Bluebeat, or One Drop — Perry apprenticed at Kingston’s Studio One. There he performed a number of chores for owner Coxone Dodd, including selling records. During his short time there he managed to record some 30 songs for the label. However, Perry and Dodd didn’t get along, so Perry moved on to Joe Gibbs and Amalgamated Records. That relationship, rocky as it was, lasted longer. However, Gibbs’ money woes had him strike out on his own and Perry started up his own label, Upsetter Records in 1968. According to the WikiWackyWoo:

His first major single “People Funny Boy”, which was an insult directed at Gibbs, sold well with 60,000 copies sold in Jamaica alone. It is notable for its innovative use of a sample (a crying baby) as well as a fast, chugging beat that would soon become identifiable as “reggae” (the new kind of sound which was given the name “Steppers”). Similarly his acrimonious 1967 single as Lee “King” Perry Run for Cover was likewise aimed at Sir Coxsone. From 1968 until 1972 he worked with his studio band The Upsetters. During the 1970s, Perry released numerous recordings on a variety of record labels that he controlled, and many of his songs were popular in both Jamaica and the United Kingdom. He soon became known for his innovative production techniques as well as his eccentric character.[1] In 1970 Perry produced and released The Wailers track “Mr Brown” (1970) with its unusual use of studio effects and eerie opening highlighting his unique approach to production.

Perry produced some of the earliest tracks for the Wailers, before they signed with Island Records. Chris Blackwell took the original tracks, removed the rough edges, renamed the band Bob Marley and the Wailers, and nothing was ever the same again.

FULL DISCLOSURE: I worked for Island Records Canada in the mid-’70s, where my first contact with Lee “Scratch” Perry and Dub Reggae was the amazing LP Super Ape by The Upsetters. I loved Dub Reggae from the start because it was like Psychedelic Reggae. The fun was trying to identify the original tunes that Perry Dubbed up. It’s one album from that era I still put on and CRANK it up to 11. 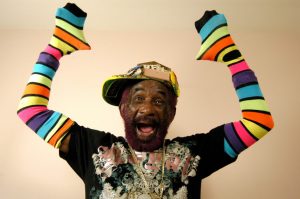 Perry’s career has had its ups and downs over the years, including a December 2015 fire at his Secret Laboratory Studio. According to Rolling Stone:

Lee “Scratch” Perry‘s “secret laboratory” studio in Switzerland burned down Thursday, destroying the dub legend’s collection of studio equipment, art, stage costumes and music. “Something very very sad happened. I forgot to [put] out a candle and my whole secret laboratory burned out,” Perry wrote on Facebook, “My whole life collections, arts, my magic hats, my magic boots, all my crazy show outfits and costumes: king, pope, general, magician… All my electronics and studio equipment and my magic mic, books, musik, CDs… Everything gone.”

On Facebook, Perry also posted photos of himself standing in the burnt-out ruins of the studio, which lent its name to Perry’s 1990 LP From the Secret Laboratory. Perry also noted in his letter, “I am so sad and my wife is so mad.” As a result of the fire, Perry is asking fans to provide specially made costumes for his upcoming trek; fans who contribute an outfit will be placed on the guest list and given backstage access when the Upsetter’s trek comes to their town.

This was Perry’s second fire. In 1981 he torched his earlier Black Ark studios himself, the episode eventually blamed on a mental breakdown.

I had the extreme thrill to see Perry perform live at DubFest in Hollywood, Florida, in September of 2009. I never thought I’d have the opportunity to see him because he spends most of his time in Europe. But, I was able to knock him off my bucket list on the same day I also saw Bunny Wailer live.

Lee “Scratch” Perry is still going strong and he’s already tweeted out his own birthday greetings.

EVERY YEAR I’M GROWING YOUNGER AND YOUNGER BECAUSE I COUNT 81 BLESSINGS, NOT BIRTHDAYS!
THNKS DUBLIN FOR BLESSING ME WITH SUCH GIFTS OF LOVE pic.twitter.com/Kogxw5wLe9

You can find many biographical details on the interwebs, but Not Now Silly is all about the music. Here’s a small sample of the hundreds of tracks that Lee “Scratch” Perry has produced and recorded over the years, starting with one of my all-time favourite Reggae tracks: