It was a thrill to get my ticket to see The First Lady Michelle Obama. One thing that was less than thrilling: To get the ticket I had to fill out a form on which I left my phone number blank. Before they’d give mer the ticket they insisted I give them my phone number, so I reluctantly did. The night before the First Lady arrived I received 3 calls reminding me the First Lady was coming. The the exact reason I didn’t want to give my phone number: I didn’t want to be bothered by a number of electioneering calls. Three calls for the same thing, within an hour of each other, borders on harassment.

The Michelle Obama rally was taking place at Fort Lauderdale’s War Memorial Auditorium, just off Florida’s famous US Route 1 near Sunrise Blvd. In the seven years I’ve lived down here, I’ve not been to War Memorial Auditorum, known as War Memorial to the cognoscenti. Oddly enough, I have been to the Parker Playhouse just catercorner from it. I saw documentarian Ken Burns at the Parker (as the cognoscenti call it), when he brought a preview of his amazing documentary “Prohibition,” and afterwards took questions about his body of work. But never the War Memorial. And, because I approached Parker Playhouse from behind, I didn’t even know War Memorial was there. They hold a lot of different kinds of events at War Memorial Auditorium, as this sign I saw on the way there will testify.

I still have the same 9,514 tunes on my music machine and by happenstance a great Sly and Robbie Reggae tune was blasting out of my windows when I arrived. Several people gave me a thumbs up. However, when that ended “Brown Sugar” started playing. I said, yeah, yeah, yeah, OOOoooo! I wish I was making this up.

There were loads of people and several fire trucks gathered around the front doors. The fire trucks were necessary because of the 95 degree heat. I saw more than one person drop and need medical attention. The line snaked around the side of the building and there were several hundred people there before I arrived. We settled in for a long wait. Doors were scheduled to open at 3:00, but my part of the line didn’t get in until about 4:30. When I finally got to the doors I looked back. The line stretched way beyond the point where I originally joined it.

While we waited in line volunteers kept working the crowd, making sure everybody was registered to vote and to see who wanted to volunteer to help President Obama win the election. There was another group of volunteers who worked the crowd to alert us that we couldn’t bring in umbrellas, which many in the crowd carried to protect themselves from the oppressive sun, or cameras. This instruction puzzled a lot of people, who were all carrying cameras, and it had to be explained over and over again. The first explanation was that  phone cameras were okay, but no other cameras. That also puzzled a lot of people, like myself, who were carrying stand-alone cameras. “Why are phone cameras allowed, but not other cameras?!?!” People were getting hot, and it wasn’t entirely from the heat. A lot of people had cameras and it’s only natural to want to document the day you saw the First Lady of the United States. It’s something you’ll want to show your children and grandchildren, provided the Mayans are wrong. Then it was clarified that small cameras, like mine, were allowed by not “big cameras.” However, the volunteers were unable to define “big camera” to anyone’s satisfaction. I presume they meant a 35mm camera with a telephoto lens, but who knows.

One other thing that was odd is they confiscated all signs from the people in line, only to pass out signs to people once we got into the auditorium. What’s up with that?

I wanted to take a picture of the security at the door, but as soon as I leveled my camera I got yelled at. When one is being yelled at by Fort Lauderdale police AND Broward Sheriff officers AND the Secret Service, ALL AT THE SAME TIME, one tends to do EXACTLY as they demand. That’s why there are no picture of that part of my adventure. However, I can describe it. All cell phones and cameras had to be turned on and handed to an officer, who inspected them and made sure they were operable. Purses, fanny packs, and knapsacks were also handed to the officers who searched them extensively. Everyone passed through metal detectors and then were ‘wanded’ on the other side. It was all quite similar to boarding an airplane, except we could keep our shoes on and there were no X-ray machines.

The other major difference to the airport security checkpoints: Everyone took it with good humour because we all understood that The First Lady’s safety trumped (no pun intended) any small inconvenience we might have experienced.

What follows are just some of the 218 pics I took once I was inside War Memorial Auditorium. 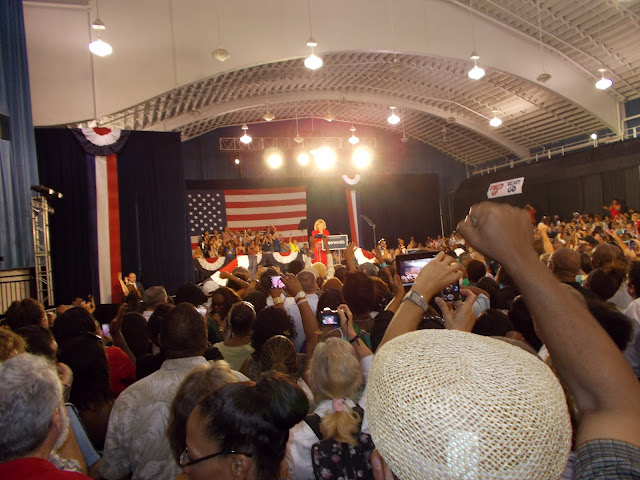 The First Lady must have been delayed at the last minute because I have never seen an intermission after the introductory speeches have already begun. These speeches are supposed to get the crowd revved up for the Main Act. However, they announced from the stage that there would be a 40 minute intermission before the First Lady would come out. That allowed the crowd to both mingle and push closer to the stage. Since it was starting to get a little tight where I was standing I decided to move back, which is why some of my pictures of The First Lady are less clear. 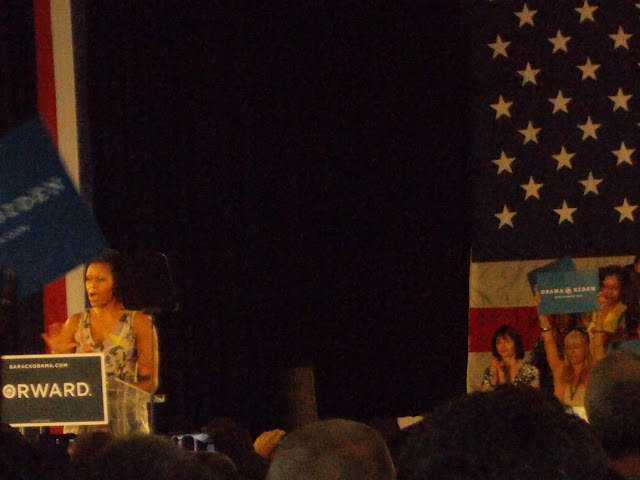 Seeing a First Lady was a heady experience. People left smiling, laughing and singing. It took forever to get out of the parking lots, but everyone was in such a good mood there was none of the typical jockeying for position one might see leaving a sporting event, for example.

All in all, it was a great experience, although a hot one.