Let me be the last to wish you a Happy Holiday this year.

It’s only appropriate that on St. Stephen’s Day, honouring The First Martyr™, the Not Now Silly Newsoom finds a new way to commemorate Stan Freberg, this time for a selfless act of philanthropy performed on this day in musical history.

Funded by the royalties on his recording of “Green Chri$tma$”, a thumb-in-the-eye at the over-commercialization of Christmas, Freberg gave $1,000 to the Hemophilia Foundation on this day. However, there’s more to the story, of course.

More proof that the more things change, the more they stay the same: Christmas is still over-commercialized and saying anything negative against the holiday brings about a Phony War on Christmas. 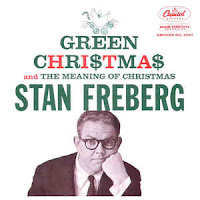 According to Top 5 Christmas Novelty Recordings:

“Green Christmas” is a brilliant satire of the advertising profession and the commercialization of Christmas by the same. Borrowing from Dickens, Scooge is the COB of a large advertising firm, who is confronted by Bob Cratchit, the owner of a small spice company who is resisting the push to use Christmas as an advertising bonanza. Many of the most prominent products being hawked in a Holiday vein at that time (Coca-Cola, Chesterfield cigarettes, etc…) were slyly parodied, and subsequently many advertisers of the day refused to have their commercials air anytime the record was played and as a result the record received no commercial airplay. Nevertheless, the record sold, and there was a newspaper report on December 27, 1958, that the day after Christmas of 1958, Stan Freberg presented a check for $1,000 to the Hemophilia Foundation of Southern California as his royalties from the first year’s release of “Green Chri$tma$.” He gave all royalties from the song to charities to quell any criticism that he was profiting hypocritically from the subject of his satire.

Listen to this way-ahead-of-its-time tune:

In an unofficial vote of NNS staffers, Freberg wins as the greatest song parodist hands down. Not to take anything away from Weird Al, but Freberg took his droll humour from records to entire advertising campaigns. However, the negative publicity in the wake of “Green Chri$tma$“ almost sunk him. Here’s what the WikiWackyWoo has to say about that:

At first, Capitol Records refused to release the record. Lloyd Dunn, the president of Capitol, told Freberg the record was offensive to everybody in advertising, and predicted that Freberg would never work in advertising again. Freberg responded with his intent to end his entire recording contract with Capitol. He spoke to a contact at Verve Records, and the company offered to release the record without even hearing it. Faced with this, Capitol finally decided to release it but provided no publicity at all.

The record was attacked in advertising trade magazines. It was played only twice in New York by one disc jockey, and the station’s sales department threatened to have him fired if he played it again. KMPC in Los Angeles played the record, but some advertisers required that their ads be scheduled more than fifteen minutes away from it. An editorial in the Los Angeles Times condemned it, but the author later admitted he had not listened to it. Similarly, Robert Wood, the station manager of KCBS-TV in Los Angeles (later president of CBS), cancelled a TV interview with Freberg because the record was “sacrilegious” and he did not need to hear it because he had read about it.[2] KRLA, Pasadena (Freberg’s hometown) showed it as reaching #3 in popularity in their printed survey. It is unclear whether this was based on sales or airplay.

Station KFWB, then known as “Color Radio Channel 98” also kept on playing the record. KFI, then the Earl C. Anthony station, played it a few times and then discontinued as did many other stations because of reaction from the advertising community.

However, the mail Freberg received from the public, including Christian clergy and rabbis, was overwhelmingly positive.

Within six months, Coca-Cola and Marlboro, both recognizably satirized in the record without being named, asked Freberg for advertising campaigns. He turned down Marlboro, but he created a campaign for Coca-Cola that was very effective. And contrary to the predictions of Lloyd Dunn (see above) and others, Freberg’s advertising campaigns continued to be in demand and successful for decades.

Some years later, Time magazine was going to publish an essay in their Christmas issue about the overcommercialization of Christmas, including considerable attention to Green Chri$tma$. The essay was killed at the last minute due to pressure from their sales department.

That wasn’t the only time Freberg took a crack at Christmas, nor at Jack Webb for that matter, who he also parodied in St. George and the Dragonet, and Little Blue Riding Hood, and Christmas Dragnet, all from 1953:

Sadly Stan Freberg died almost 3 years ago, in April of 2015. Read his NYT obit, Stan Freberg, Madcap Adman and Satirist, Dies at 88, for a deeper dive into this hilarious satirist’s life.

FURTHER READING at Not Now Silly:
Stan Freberg ► Nostalgia Ain’t What It Used To Be
Day In History ► Manhattan Island Sold