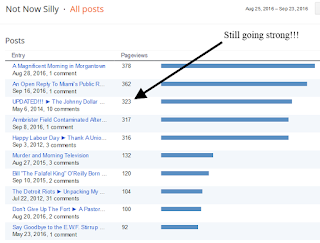 Good news, Not Now Silly fans. The Newsroom is making a second attempt at creating a brand new web site under its very own domain.

I’ve now seen the latest test of the format, which I like a lot. It’s very clean and uncluttered. Furthermore, the design will make it far easier for my readers to find all of the stories under the various rubrics I have created. Having signed off on the basic design, I have now asked my web designer (who I have taken on as a full partner) to populate the template with real words (my words) as opposed to all that fake text used as placeholders in the WordPress template.

One of the mistakes I made the last time I tried this was promising too much, too quickly. And, that was before my then-web designer totally fucked me over. Then he refused to return my deposit, which I consider theft. [Read: Webbitez Bitez ► A Consumer Report].

This time I won’t over-promise anything. COMING SOON is the most I will say.

I’m still trying to find the rhythm of my new life, now that Pops has gone to live in Michigan. I took care of him for 11 years, the longest I lived anywhere since I lived on King Street in Toronto. Without Pops in the condo, it feels so lonely and empty. Pops took up a lot of space, even though he wasn’t very big. There are times I actually think, for a brief moment, that I hear him calling me from the living room.

I’ve still not gotten used to having the entire condo to myself. When home I find myself spending most of my time in my room watching tee vee — just like I always have — even tho’ there are bigger and better tee vees in the other rooms. Heck, there are bigger rooms and more comfy beds elsewhere in the condo, for that matter. Yet, I am still stuck behind this same keyboard in the very same place in my bedroom, in the same condo, in the same Florida city, in the same country.

Additionally, and no less important, my Cosmic Love Affair dissolved at practically the same time. [Read: Before and After Synchronicity, another in my Pastoral Letter series.] Suddenly, the two things that were the gravitational pull in my life were gone. To mix metaphors, I feel like a tether-ball spinning helplessly out of control after my rope broke.

None of this is helping my depression.

All of my rhythms are off, especially my writing schedule, which I keep trying to get back to. I’ve neglected Monday Musical Appreciation and Throwback Thursday since I embarked on my last road trip. Maybe promising right here, right now, that I’ll re-fire the boiler under the Steam-Powered Word-0-Matic will help me resolve to pick those up again. As careful readers will see I’ve already started.

What else have I written lately? Just a few important articles, that’s all. I discovered that parts of Armbrister Field were closed because of toxic soil, even though I attended the ribbon cutting a few years back that was supposed to demonstrate that the park was safe. Why wasn’t the toxic soil cleaned up back then? Why was there such a rush to get this park reopened if there was actually toxic soil in it? To that end I launched a Freedom of Information Act request for material on a number of topics surrounding these items.

When it turned Kafkaesque — almost immediately — I posted An Open Reply To Miami’s Public Records Department. While there has already been a response from the city, it doesn’t really answer my most important question and prompts a new one. I’m not prepared to make the reply public — yet. However, we’ll see where this goes.

BTW: I have also started a Go Fund Me page to help offset some of the costs incurred researching and writing these stories. Aside from having to pay the City of Miami for each document search, there’s also the per page photocopying fee on top of that. And, the Freedom Of Information requests are just one of the many expenses for Not Now Silly. There’s gas, of course. Coconut Grove is 35 miles from where I live. And, virtually every time I go there I have to pay for parking. It all adds up.

I have one investigative story in the pipeline that I’ve been working on since early June. I’ve never been 100% happy with how it’s shaped, so I keep kicking at it here and there. Recently there’s been some stories in the news that’ll force an update to this article anyway. Now I need to decide whether I will continue to get this draft in the appropriate shape this one, or just start from scratch.

Since my last Unpacking the Writer (almost a monthly series) I have also written a new chapter in my never-ending search for Don Knotts‘ roots, and added another Pastoral Letter, my continued search for where my spirituality comes from if I am a stone cold atheist. I’m not so sure anyone else cares, but I am finding out a whole lot about myself because I’m asking questions.

Just this moment, as I was finishing the final edit to this post before sending it off into the electronic ether to turn it into a page, I came to a new realization about spirituality that will become my next Pastoral Letter. It may also contain my latest Mea Culpa.