I was just 11 years old in 1963 and already numb from the assassination of President John F. Kennedy.

It was the time in my life I was just becoming politically aware. Kennedy was a young, vibrant president who replaced Ike Eisenhower, who seemed like an old fuddy duddy in comparison.

I still didn’t know the difference between Democrat or Republican, or what political platforms were. However, there was one thing I knew: President Kennedy was revered by the Black community for having championed the Civil Rights Act in his speech from the Oval Office on June 11, 1963. This followed his sending out the National Guard to protect 2 Black students who had enrolled at the University of Alabama, but had been prevented from attending.

It was also during this period I started going out with the moving crews for my father’s store on 12th Street. [See: The Detroit Riots] This involved delivering furniture to the Black folk living in the 4-story walk-ups and duplexes in the area. One thing that always struck me was how many of these homes had small altars on mantles and tables. In these displays a combination of 3 people were represented: Jesus Christ, President Abraham Lincoln, and J.F.K. 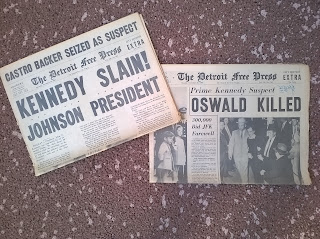 This president seemed golden and his administration was later called Camelot by hagiographers, long before we learned of his personal peccadilloes and that he started the march into Vietnam that LBJ put on steroids.

The entire country seemed to be on hold. There was nothing else to do that Sunday morning, but sit in front of the television watching the wall-to-wall coverage of the Kennedy assassination.

I can remember it like it was yesterday. I was alone. I don’t know where my parents or sisters were, but I was glued to the tee vee. Every channel was showing the same thing. We were shown the commotion at the Dallas police HQ as they were about to transfer assassin Lee Harvey Oswald to a safer, more secure jail.

Just as Oswald was coming into camera view, Jack Ruby lunged forward and fired one shot into his stomach. Ironically, Oswald was rushed to the same hospital where President Kennedy was pronounced dead.

This is the channel I was watching:

It was the first live televised murder and it shocked me to my core. I have now seen the same footage thousands of time in the 53 years since. We all have. But not everyone was a witness to the event as it happened.