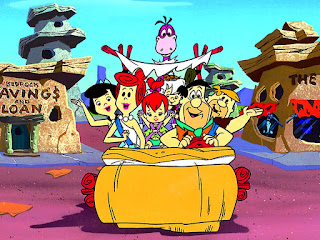 Strictly speaking the modern stone-age family was not a Saturday morning cartoon.

The Flintstones has the distiction of being the very first cartoon to run in prime time. It last 6 years. It moved to Saturday mornings thereafter in constant syndication and reruns. Yet, The Flintstones was never intended for children, as the WikiWackyWoo reveals:

Despite the animation and fantasy setting, the series was initially aimed at adult audiences, which was reflected in the comedy writing, which, as noted, resembled the average primetime sitcoms of the era, with the usual family issues resolved with a laugh at the end of each episode, as well as the inclusion of a laugh track. Hanna and Barbera hired many writers from the world of live action, including two of Jackie Gleason’s writers, Herbert Finn and Sydney Zelinka, as well as relative newcomer Joanna Lee while still using traditional animation story men such as Warren Foster and Michael Maltese.

It’s interesting the show used some of Jackie Gleason’s writers. Again, I’m going to let the Wiki tell you all about it:

However, at 8 years old, none of that mattered to me. I just loved all the rock jokes and anachronisms, even if I didn’t know what that word meant back then.

The following edit includes the original theme song (which I also don’t remember) used for the first 2 seasons but changed to the familiar one above because it was the same tune as the Bugs Bunny “Overture, hit the lights” theme song.

Something else I didn’t learn until I was old enough for it to matter: The famed Mel Blanc voiced Barney Rubble. He also voiced (according to the Wiki): Bugs Bunny, Daffy Duck, Porky Pig, Tweety Bird, Sylvester the Cat, Yosemite Sam, Foghorn Leghorn, Marvin the Martian, Pepé Le Pew, Speedy Gonzales, Wile E. Coyote, Road Runner, the Tasmanian Devil, and many of the other characters from the Looney Tunes and Merrie Melodies theatrical cartoons during the golden age of American animation. He was, in fact, the voice for all of the major male Warner Bros. cartoon characters except for Elmer Fudd, whose voice was provided by radio actor Arthur Q. Bryan (although Blanc later voiced Fudd, as well, after Bryan’s death).[1]

Playing Trixie to his Norton was Bea Benadaret, as his wife Betty. These days you can see Bea Benaderet early Saturday (and Sunday) mornings on Antenna TV on the George Burns and Gracie Allen Show. However, I first became aware of her, and fell in love with her, as Kate Bradley, the owner of the Shady Rest Hotel in both Petticoat Junction and Green Acres. She also played Cousin Pearl Bodine on The Beverly Hillbillies, giving her the Corn Pone Hat Trick.