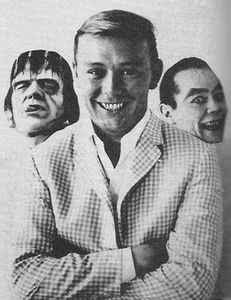 On this day in 1962, Monster Mash was #1 on the Hit Parade, the first and last time a Halloween tune made the top of the charts.

The song was written by Lenny Capizzi and Robert George Pickett, who was known as Bobby “Boris” Pickett ever after. They were members of a Doo Wop band called the Cordials. One night lead singer, and aspiring actor, Bobby performed the tune “Little Darlin'” in the voice of Boris Karloff and the audience went wild.

Lightening struck, animating the song like Dr. Frankenstein’s laboratory animated the Monster. The Monster Mash was written in May and shopped around to, and rejected by, several record companies until Gary S. Paxton agreed to produce and release the single on his GarPax label. GarPax had success with the previous novelty tune “Alley Oop,” by the Hollywood Argyles, of which Paxton was a member.

Over the years Pickett mined the Spooky theme for song after song, but none ever achieved the status of The Monster Mash, although when I had the LP in the ’60s I much preferred The Blood Bank Blues.