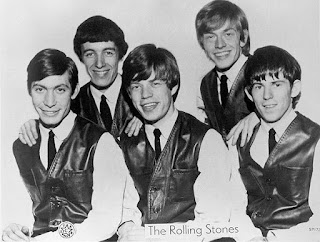 This is an important week in The Rolling Stones‘ history, with 4 separate events to write about — 3 of them from today alone.

The year 2016 brings them full-circle.

Formed in 1962, The Rolling Stones started as a Blues band, imitating the music they heard on “race records” coming out of the United States, before they started writing their own Rock and Roll tunes in imitation of their friends and rivals The Beatles. In December the Stones will return to their roots with “Blue and Lonesome” — their first studio CD in over a decade — a brand new album of old Blues. Here’s a 60 second sample:

So, why is this day so special for The Rolling Stones? 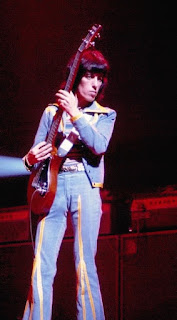 It was on this day in 1936 that future (and former) Rolling Stones bassist Bill Wyman was born as William George Perks in South London, England. That makes him 80 years old today. Wyman stepped off The Rolling Stones’ train in 1993 and has been touring as Bill Wyman’s Rhythm Kings since 1997.

However, on Wyman’s 23rd birthday in 1959 — before he had even bought his first bass guitar — he married his first wife, 18-year-old Diane Corey. She stepped off the Wyman train in 1967, the divorce becoming final in 1969.

Today also represents the denouement of an event that could have spelled the end of The Rolling Stones. More than a year earlier, on February 27, 1977, Keith Richards was busted for possession of heroin in Toronto, Ontario, Canada.

The Stones had been in Toronto to play a surprise show — at the famed El Mocambo on Spadina Avenue — that later became the 2-LP release Love You Live. This was also the show that saw them partying with Margaret Trudeau, the wife of Canadian Prime Minister Pierre Trudeau.

• The full El Mocambo release, one tune at a time •

[Richards] was awakened by the Royal Canadian Mounted Police who found five grams of cocaine and 22 grams of heroin in his room, among other substances. Richards was charged with “possession of cocaine and heroin with intent to traffic.”

Richards recalled being awoken by the officers smacking him conscious so that they could formally arrest him: “That took them about two hours to drag me out — pow, pow. I woke up with, like, rosy cheeks. ‘Oh, he’s awake: You are under arrest!’ (Laughs) ‘Oh, great!’ I looked at the old lady and I said, ‘I’ll see you in about seven years, babe.'”

Although Richards was eventually released on $25,000 bail, due to the trafficking charge, he faced a minimum seven-year prison term if found guilty. Richards, who due to his growing and public drug use had been on the wrong side of the law since 1967, was now facing the most serious criminal charge of his life.

A 7 year prison term — any prison term — could have spelled the end of the Stones. However, on this date in 1978, in a plea deal that gave him a Suspended Sentence, Richards pleaded guilty to heroin possession. He was also ordered to play a charity concert for the Canadian Institute for the Blind.

Later this week we also remember event number 4, which was recorded and released as a movie.

T.A.M.I. Show is a 1964 concert film released by American International Pictures. It includes performances by numerous popular rock and roll and R&B musicians from the United States and England. The concert was held at the Santa Monica Civic Auditorium on October 28 and 29, 1964. Free tickets were distributed to local high school students. The acronym “T.A.M.I.” was used inconsistently in the show’s publicity to mean both “Teenage Awards Music International” and “Teen Age Music International”.

The best footage from the two concert dates was combined into the film, which was released on December 29, 1964. Jan and Dean emceed the event and performed its theme song, “Here They Come (From All Over the World)”, written by Los Angeles composers P.F. Sloan and Steve Barri. Jack Nitzsche was the show’s music director.

The film was shot by director Steve Binder and his crew from The Steve Allen Show, using a precursor to high-definition television, called “Electronovision“, invented by the self-taught “electronics whiz,” Bill Sargent (H.W. Sargent, Jr). The film was the second of a small number of productions that used the system.[1] By capturing more than 800 lines of resolution at 25 frame/s, the video could be converted to film via kinescope recording with sufficiently enhanced resolution to allow big-screen enlargement. It is considered one of the seminal events in the pioneering of music films, and more importantly, the later concept of music videos.

Among the other performers at The T.A.M.I. Show were: The Beach Boys, Chuck Berry, James Brown, Marvin Gaye, Gerry & the Pacemakers, Lesley Gore, Jan and Dean, Billy J. Kramer and The Dakotas, Smokey Robinson and The Miracles, and The Supremes. The house band were those musicians known to us as The Wrecking Crew, and included such veteran studio musicians as Hal Blaine (drums), Jimmy Bond (electric bass), Lyle Ritz (upright bass), Plas Johnson (sax), and Leon Russell (piano). Handling guitars was the triple threat of Tommy Tedesco, Bill Aken, and Glen Campbell.

The songs The Rolling Stones played at The T.A.M.I Show were “Around and Around”, “Off the Hook”, “Time Is on My Side”, “It’s All Over Now”, “I’m Alright”, and “Let’s Get Together”. The Stones closed the movie in dramatic fashion. Check out the smoking ending where The Wrecking Crew begins to play, the Stones drop out, and the entire stage is filled with performers and dancers:

Still going strong, The Rolling Stones played “Oldchella” just last week, covering The Beatles’s “Come Together,” which was available on the innertubes briefly.