Top Cat is one of the many cartoons produced by Hanna-Barbera, just like Tom & Jerry and The Flintstones, covered elsewhere in these pages.

Top Cat launched a year after The Flintstones debuted and, just like it, Top Cat was not a Saturday morning cartoon. It was originally broadcast on ABC at 8:30PM Wednesdays, sandwiched between The Steve Allen Show and Hawaiian Eye. Its competition was The Joey Bishop Show on NBC and Checkmate on CBS.

Top Cat had 2 major influences along with a host of minor ones. I’ll let the WikiWackyWoo tell you all about that:

Top Cat and his gang were inspired by the East Side Kids, characters from a series of popular 1940s ‘B’ movies, but their more immediate roots lay in The Phil Silvers Show, a late-1950s military comedy whose lead character (Sergeant Bilko, played by Silvers) was a crafty con-man. Maurice Gosfield, who played Private Duane Doberman in The Phil Silvers Show, provided the voice for Benny the Ball in Top Cat, and Benny’s rotund appearance was based on Gosfield’s. Additionally, Arnold Stang‘s vocal characterisation of the lead character, the eponymous Top Cat, was based on an impression of Phil Silvers‘ voice.

Other influences include the movie Guys and Dolls, in which actor Stubby Kaye played a short, stout, streetwise gambler: a virtual Benny the Ball prototype. Lastly, an unlikely contender (as it also came from Hanna Barbera) was the character Hokey Wolf on The Huckleberry Hound Show, whose segment also paralleled The Phil Silvers Show.[2][3]

It’s time for a Top Cat Sing-A-Long.
C’mon, you know all the words.

Top Cat and his gang (like Sgt. Bilko before them) had one money-making scheme after another. They have to avoid Officer Dibble, who is always trying to shut down their scams and rid Hoagy Alley of Top Cat and his gang of grafters once and for all. Rinse and repeat. 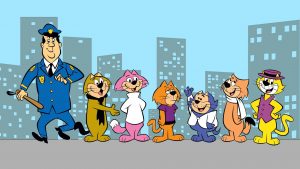 Of course, I just loved Top Cat because it was a cartoon and I was merely a 10-year old kid. Little did I suspect there was a much deeper meaning:

Animation historian Christopher P. Lehman says that the series can be seen as social commentary. The cats may represent disenfranchised people confined to living in a poor environment. Top Cat’s get-rich- quick schemes are efforts to escape to a better life. The gang faces a human police officer who frustrates their efforts and keeps them trapped in the alley.[5] This enforcement of the social order by police ensures that the cats will not escape their current living conditions.[5]

Just like the alley outside Trump Tower. But, I digress.

Top Cat was only in prime time for a year. It moved to Saturday mornings, where it played in perpetual reruns for years. In 1988 a full-length made-for-TV cartoon, Top Cat and the Beverly Hills Cats, which was a remake of the earlier “Missing Heir” and “Golden Fleecing” episodes of the original series. Arnold Stang and Marvin Kaplan (who died last year) reprised their roles from the classic Top Cat. Then came 2011’s Top Cat: The Movie, followed by the CGI effort Top Cat Begins, which was a prequel to the original series. Neither of which did I know about until just now.

It was the original series that captured my attention. Enjoy this Making Of documentary: