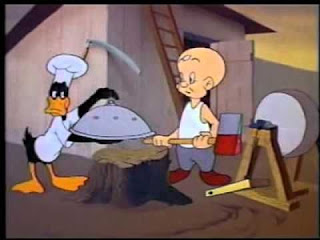 Let’s turn our attention to the various antagonists in the Looney Tunes/Merrie Melody cartoons from by Warner Bros.

The Warner brothers were Harry, Albert, Sam and Jack, whose parents left a repressive regime in Poland before the turn of the last century.

First locating in Baltimore, then London, Ontario, Canada, before settling back in Baltimore. Then, a few years later, the family moved to Youngstown, Ohio. That’s where the brothers Warner first entered Show Business near the bottom rung of the ladder in the early 1900s.

Sam and Albert got their hands on a movie projector, paid $150 for prints of Life of an American Fireman and The Great Train Robbery, and took their show on the road. They started in the small towns of western Pennsylvania and eastern Ohio. These were mining towns starved for entertainment. As it turned out showing movies to rapt audiences was like printing cash. As the other brothers joined, it wasn’t long before they bought their first movie theater, and then another. Then they moved into film distribution, until they eventually branched out into producing movies at their own studio in Hollywood before the first World War.

By 1930 Warner Bros. was a powerhouse in the movie biz and decided to branch out into cartoons, by buying them from Leon Schlesinger, who got them from Harman and Ising Studios. The Looney Toons and Merrie Melodies cartoons became shorts for movie theaters playing between Warner Bros. movie double bills.

These cartoons eventually made it to Saturday morning tee vee, which was starved for content in the late ’50s and ’60s. That where those of my generation watched them endlessly.

Enough history. Here are some cartoons to Make ‘Merka Laugh Again, especially the last one with a wascally wabbit teaching a Donald Trump wannabe what’s what: